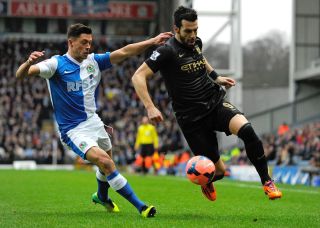 Last year's beaten finalists will need to continue their impeccable home form when the two replay at the Etihad Stadium after Scott Dann cancelled out Alvaro Negredo's first-half opener.

Towards the end of what was a mostly low-key 45 minutes, Negredo handed City a half-time advantage, with a simple finish from close range following a dangerous David Silva corner.

Any hopes of a simple progression were halted five minutes before the hour however, when captain Dann made the most of a Costel Pantilimon error to equalise, with Rovers able to frustrate and threaten 10-man City in equal measure during the remainder of the tie.

Manuel Pellegrini stated on Friday that he would look play a strong side in the competition and he kept to his word, with regulars such as Fernandinho, Silva and Negredo all handed starting spots, while the Chilean named Joleon Lescott captain after dismissing reports the defender could leave City in January.

For the hosts, Paul Robinson made his first start since December 2012 having suffered a blood clot on his lung while Rudy Gestede was preferred to leading scorer Jordan Rhodes up front.

City enjoyed much of the ball in the opening exchanges but were let down by their final ball while Rovers' first effort on target came courtesy of Dann's header, which was easily saved with by Pantilimon.

It sparked the hosts' first spell of pressure as Tom Cairney's free-kick delivery and another Dann header caused problems for City's back line.

Negredo and Silva both came close midway through the half before City eventually went ahead through the former on the stroke of half time.

The former Sevilla man latched on to Dzeko's header from Silva's set-piece, calmly converting at the far post amid disagreements and shouts of offside from the Blackburn defence.

Dann had Blackburn level 10 minutes after the interval however, with Pantilimon largely culpable, as he flapped at a routine header from Gestede, allowing the home skipper in for a simple finish.

City had not lost or conceded a goal in their previous five FA Cup ties against lower division opposition and quickly set about scoring a second.

City piled on the pressure late in the game but to no avail, and Pellegrini's men were not helped by the dismissal of Dedryck Boyata late on after receiving a second yellow card for a poorly-timed challenge on DJ Campbell.