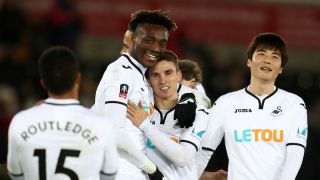 Kevin Nolan's side had matched the Swans at Meadow Lane in a 1-1 draw last month but the League Two club were thoroughly outclassed in Tuesday's replay, Tammy Abraham and Nathan Dyer scoring a brace apiece.

Carlos Carvalhal, who has led his side to an eight-game unbeaten run, will now return to Hillsborough to face former club Sheffield Wednesday in the next round.

Swansea opened the scoring after 18 minutes as Luciano Narsingh played a one-two to skip clear down the right, delivering a near-post cross that Abraham turned home for his first goal since October.

3 - Tammy Abraham has been directly involved in three goals in a single match for the first time in his club career (2 goals, 1 assist). Refreshed. February 6, 2018

The Premier League side immediately extended their lead, Dyer racing on to Abraham's pass to score, the winger then adding his second of the night with a sweet 20-yard finish.

Noor Husin picked out the top-left corner from similar range to give County brief hope, but Abraham restored the three-goal advantage from another Narsingh assist, before Kyle Naughton lashed in the hosts' fifth.

Wayne Routledge added to the scoreline and then set up Tom Carroll for a fine 20-yard curler, with Daniel James coming off the bench to wrap up the scoring with a debut goal.

Well done boys on the win   two goals and two assist.... back with the goals thank you for the support tonight  February 6, 2018

Huddersfield had to come from behind to secure an extra-time win at Birmingham City, Tom Ince on target to secure a 4-1 victory against the Championship side, with the Terriers set to host Manchester United in the next round.

And on an awful Spotland pitch, Ian Henderson scored the only goal of the game early in the second half to earn League One strugglers Rochdale a 1-0 victory over Millwall, setting up a potential fifth-round meeting with Tottenham, who host Newport County in their replay on Wednesday.

Absolute scenes at the . Dale have booked their place in the fifth round of the with a 1-0 win over Millwall! February 6, 2018