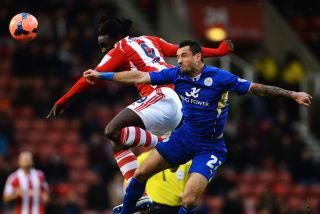 The Premier League outfit had the better chances at the Britannia Stadium on Saturday and proved more clinical in front of goal than their opponents, the leaders of the Championship.

Kenwyne Jones opened the scoring in the 16th minute with a towering header from a left-wing cross, before a long-range effort from Charlie Adam doubled Stoke's lead just before the hour.

Leicester rarely troubled Jack Butland in the Stoke goal and even though David Nugent pulled a goal back the visitors could not complete a comeback.

The result sees Stoke, dreaming of a return to Wembley after their final appearance in 2011, go into the hat for the fourth-round draw on Sunday, while Leicester can focus on securing a return to the top flight.

Jamie Vardy, Andy King and Jeffrey Schlupp were among those recalled by Leicester, who made five changes.

Both sides took time to settle into the game, with the first opening falling to the visitors in the 13th minute through Anthony Knockaert.

The Frenchman went past Geoff Cameron and into the penalty area but his shot was parried by Butland, and Glenn Whelan cleared the danger.

Stoke responded with two chances in quick succession. The first was wasted by Adam but Jones made no mistake in the 16th minute.

After Oussama Assaidi had raced down the left and delivered a perfect ball to the back post, Jones rose above his marker and powered a header past Kasper Schmeichel.

Nigel Pearson rearranged his side to cope with the width provided by Stoke and chances soon began to come Leicester’s way, with Knockaert and Schlupp both wasting good opportunities just before the half hour.

Jones nearly grabbed a second soon after the break as he rose to meet a cross from Adam.

The striker powered a header towards goal that Schmeichel pushed against the post before gratefully clutching the ball at the second attempt.

Stoke did double their advantage in the 55th minute as Adam scored his fifth of the season in all competitions.

Arnautovic won the ball inside the Leicester half and fed the Scot, who carried the ball towards the penalty area and fired a superb shot beyond Schmeichel from 25 yards.

Leicester halved their deficit with 13 minutes remaining through substitute Nugent.

The striker had been denied by a fantastic Butland save moments earlier, but found the net with a close-range header from a Marcin Wasilewski cross.