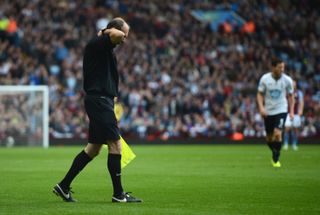 The incident occurred just after Andros Townsend had given Tottenham a 1-0 lead over Aston Villa in a Premier League game that saw the London club go on to win 2-0.

Bryan was hit on the back of the head by the flare, which was thrown from the section of the ground allocated to Tottenham fans.

West Midlands Police have arrested two men, aged 25 and 47, and the FA will await a report from the match officials before deciding what action to take.

An FA spokesman said: "The FA will investigate this matter, which is unacceptable.

"We will await the match officials' report and will be speaking to the clubs.

"Such incidents highlight the dangers of pyrotechnics being used in a football stadium."

Tottenham boss Andre Villas-Boas condemned the culprits and hopes action is taken to ensure such an incident does is not seen again.

"It is not great to see," said the Portuguese.

"It should be avoided completely. It touched the linesman and situations like this don't have a place in football. I sincerely hope it doesn't happen again."

A 15-year-old boy needed hospital treatment after suffering lung damage as a result of a smoke bomb that was thrown during a clash between Wigan and Villa at the DW Stadium in May.

Two women also needed attention as a result of the same incident at the end of last season.