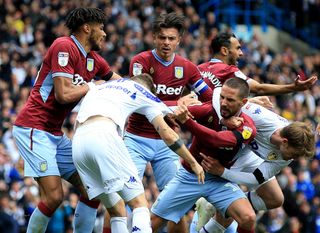 The Football Association will review the referee’s report from the Championship clash between Leeds and Aston Villa before deciding whether to take action, Press Association Sport understands.

Television replays appeared to show no contact was made and Villa boss Dean Smith has said the club will be appealing the decision and are confident of getting it overturned, with any punishment set to rule El Ghazi out of some play-off games through suspension.

A successful appeal could cause problems for Leeds and Bamford ahead of their play-off campaign, with a charge of simulation a sanction open to the FA which also carries a ban.

The second-half incident occurred after Mateusz Klich put Leeds in front in hugely controversial circumstances. The home side played on as Villa’s Jonathan Kodjia lay injured and Klich turned the ball in.

However, after furious Villa protests and a mass melee, which included the incident involving El Ghazi and Bamford, the visitors were allowed to walk in an equaliser and Albert Adomah obliged.

Leeds captain Pontus Jansson almost intervened to stop Adomah scoring, as he appeared to disagree with the decision made by his manager Marcelo Bielsa.

Referee Stuart Attwell’s report from the 1-1 draw will be read by the FA in relation to the incident.

A further incident being examined could be an alleged punch by Villa midfielder Conor Hourihane on Klich after the controversial opening goal.