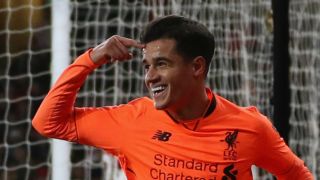 The 'Fab Four' have become the 'Fab Three'.

Philippe Coutinho's £142million move to Barcelona leaves Liverpool needing to fill the void left by the departure of their biggest star for the second time in less than four years.

Coutinho follows in the footsteps of Luis Suarez, who swapped Anfield for Camp Nou in 2014 after playing the lead role in Liverpool's oh-so-close push for the Premier League title that year.

Brendan Rodgers' side famously fell short as Manchester City clinched the title and Suarez's exit rubbed salt in what were gaping wounds.

The Uruguay international's switch to LaLiga broke up another of Liverpool's questionably nicknamed attacking collaborations, as 'SAS' - his partnership with Daniel Sturridge - became simply 'S'.

And his exit had a drastic impact on the club he left behind, who went from having a 31-goal top scorer in 2013-14 to giving nine-goal Steven Gerrard the golden boot the following season.

Indeed, Suarez finished as Liverpool's top scorer in each of his three Premier League campaigns and the recruitment of Mario Balotelli, Rickie Lambert and Divock Origi to support the injury-plagued and Suarez-less Sturridge simply did not come close to filling the gap as Rodgers' men finished sixth in 2014-15.

But as Coutinho packs his bags for Catalonia, Liverpool can feel confident that they are much better equipped to cope with their latest big-name exit.

The fact Coutinho, Roberto Firmino, Sadio Mane and Mohamed Salah have been dubbed the 'Fab Four' is testament to Liverpool's attacking depth this season, with Salah - a close-season arrival from Roma - having already contributed 17 league goals.

Jurgen Klopp's rotation policy means the Reds have not become overly reliant on one particular combination and the stats show that they have been more successful when Coutinho has not played in 2017-18.

Liverpool have a win percentage of 42.9 from the 14 league matches in which Coutinho has featured, but have triumphed in 75 per cent of the eight matches the Brazilian has missed.

Klopp's men are also marginally more prolific in front of goal without Coutinho, scoring 1.3 per match compared to 1.1 when he is involved.

So, while Coutinho's Liverpool contribution should not be underestimated - he top-scored with 13 last season - Liverpool retain the services of a trio of attacking players who can more than bear the weight of their former colleague's absence.

And, with Leicester City winger Riyad Mahrez now heavily linked with a move to Anfield among other reported targets, it seems Liverpool are taking no chances in their bid to stave off a repeat of the post-Suarez malaise.