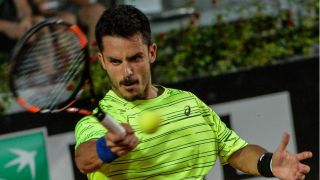 Qualifier Thomas Fabbiano followed up his first win on the ATP Tour with another victory to reach the quarter-finals at the Chennai Open on Thursday.

The Italian opened his ATP account when he beat Jozef Kovalik in the last round, almost eight years after making his debut, and upset the odds to claim a 6-4 7-5 win against sixth seed Gilles Muller, who is ranked 119 places higher.

Fabbiano conceded 14 aces without scoring one of his own but managed to win both sets by a single break to send up a last-eight clash with third seed Benoit Paire.

Paire kicked off his campaign with a 7-5 7-5 win against Lukas Rosol, overcoming a poor first-serve success rate of 50 per cent to progress.

"I was moving well, which is very important because Rosol hits the ball very flat and I have to cover the court against him," said Paire of his overall performance.

"My backhand is one of my best shots and I did a good job of varying it today."

Ramanathan will now face Aljaz Bedene, who came from behind to beat Luca Vanni 5-7 6-3 6-4.