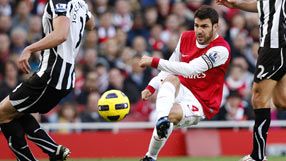 The 23-year-old World Cup winner has been dogged by injuries over the last two seasons and failed to make an impact as the Gunners slipped to a shock 1-0 home defeat by Newcastle on Sunday.

Despite recovering from a broken leg suffered in March, Fabregas has endured a stop-start campaign so far and has struggled to recapture last season's talismanic form.

But after missing last week's Champions League defeat to Shakhtar Donetsk, the Catalan has moved to reassure supporters that it is nothing to worry about and just a case of looking after his body.

"The good news is there is no tear on the hamstring, nothing. It's just a little bit of fluid, but it keeps coming back," Fabregas said in Arsenal's official matchday programme.

"It's outside the muscle, the 'skin' of the muscle. It's not really a muscle injury, it's fluid that keeps coming back and it's very annoying.

"We are working on it, looking at my hips because they are always very tight. We have to work on it but also understand that I am 23-years-old and I've played many, many games.

"Soon I will play my 200th Premier League game as well as nearly 60 for the national team and 60 in the Champions League. So that's a lot of games for my age and I have to take care of myself."

However, his boss Arsene Wenger reckons that Fabregas has yet to overcome the mental ordeal and that it may still be playing on his mind, despite completing his recovery.

"Cesc, I think, still played a little bit restricted," Wenger told Sky Sports.  "He has no real pain, but is still a bit affected I feel, it is still there in his head."