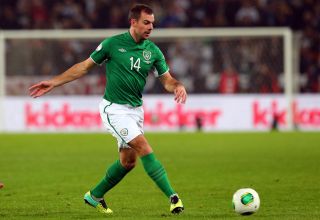 Gibson fell awkwardly in the first half of the Republic of Ireland's 3-1 FIFA World Cup qualifying win over Kazakhstan in Dublin.

The Everton midfielder came together with Andrei Finonchenko and although the impact was minimal, Gibson was clutching at his right knee immediately after.

The 25-year-old was taken off on a stretcher and the FAI confirmed that the injury was thought to be serious with a short statement on their official Twitter account.

The FAI's post read: "Darron Gibson has been assessed by our team doc and will return to his club tomorrow for a scan with suspected knee ligament damage."

Gibson's team-mate for club and country, James McCarthy, revealed that Gibson was in serious pain following the incident.

"I saw him and he was in a lot of pain," McCarthy told Sky Sports.

"Hopefully he is okay. We wish him a speedy recovery. If we lose him for a long time, hopefully not, it will be a big blow for club and country.

"He's a massive influence (on me) and it's great to work with him."

Robbie Keane scored a penalty and John O'Shea also netted in the first half for Ireland, before a late Dmitriy Shomko own goal sealed their win on Tuesday.

They were forced to come from behind after Shomko's stunning 25-yard strike in the early stages and interim manager Noel King was delighted with the reaction shown by his players.

"It was a wonder goal but I thought the reaction immediately after the goal was positive," King said.

"We got two (quick) goals to put us in a very strong position. They (players) were very good, very compact when we needed to be.

"They tried to play and full marks to the team for having the courage (to do so). The players gave everything they had."