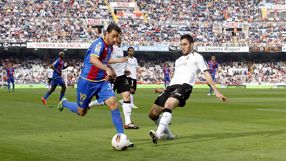 Valencia have only won once at the Mestalla in the league this year and, although they remain third and are in the Europa League quarter-finals, pressure is mounting on coach Unai Emery.

A clever pass from Aritz Aduriz opened the way for Jonas to give the hosts a 35th-minute lead but they failed to build on the advantage and allowed their opponents back into the game.

Levante levelled when Arouna Kone fired home after 53 minutes and, with both sides going close to grabbing a late winner, the impatience from the home fans grew to a crescendo at the final whistle.

Valencia have 48 points from 30 games with eight left ahead of Malaga in fourth on 47 and fifth-placed Levante with 45. Only the top three get an automatic Champions League place.

"A draw is a bad result and we are not satisfied," Emery told reporters. "The fans have protested the way they did but they supported us during the game.

"I am not worried about dropping out of the Champions League places but it us up to me to change this dynamic and find solutions," he said, adding that club president Manuel Llorente had spoken to him after the game saying the team had to improve.

Leaders Real Madrid, on 78 points, took another step towards the title with a 5-1 rout of Osasuna in Pamplona on Saturday, when Cristiano Ronaldo and Gonzalo Higuain both bagged a brace.

Real remain six points clear of chasing Barcelona, who were 2-0 winners at home to Athletic Bilbao also on Saturday.

Europa League quarter-finalists Atletico Madrid kept up the push for a return to Europe next season with a 3-0 home win over near neighbours Getafe that put them seventh with 42 points.

Argentine Eduardo Salvio looped in a header before the break and Brazilian Diego Ribas, back after injury, doubled the lead in the 61st minute at the second attempt.

Colombia striker Radamel Falcao tapped in his 20th goal of the campaign near the end.

Espanyol are eighth with 41 points after a scrappy 0-0 draw at Villarreal, who sit four points above the relegation places in 17th with 32.

In Sunday's other game Real Sociedad moved away from the danger zone by thrashing Rayo Vallecano 4-0 at home.