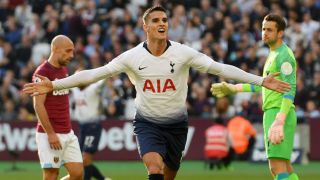 Mauricio Pochettino commended Erik Lamela for his match-winning display for Tottenham against West Ham on Saturday and challenged him to find consistency after hitting a purple patch.

Spurs ran out 1-0 victors at the London Stadium thanks to Lamela's neat header at the end of the first half, but it was his all-round performance that pleased Pochettino.

Lamela has had torrid luck with injuries since joining Spurs from Roma in 2013, but Saturday's winner was his 10th goal involvement – seven goals and three assists – in his last nine appearances across all competitions.

Many fans feel he is playing the best football of his Spurs career and, although Pochettino is happy, he wants to see him sustain his form.

"The form of the players sometimes change, it is difficult to explain," Pochettino told reporters in his post-match news conference.

"We believe in him [Lamela], trust in him. He is more mature every year, more relaxed, calmer. He now needs to be consistent.

"He's had a lot of injuries. Last season was tough for him, but with patience, belief and care for the player – that is the most important.

"I don't like to talk about individuals too much, but he was fantastic [against West Ham]. The idea was to frustrate them.

"Lamela was good, [which is] fantastic for him and his belief, and it was three very important points ahead of a tough period we have."

Lamela's goal came after some good play by Moussa Sissoko on the left, as he cut in from the right and found the Argentina international with a left-footed cross.

It was one of several notable moments from the hard-working Sissoko, and Pochettino was upbeat about Spurs fans starting to go easier on him following a difficult start to life at the club.

"He is a very professional player and has been a big part of the squad," Pochettino added. "I think Moussa provides balance and I am happy that the fans have started to see him like a player that helps the team and the club."