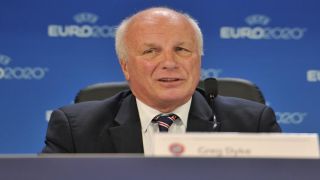 The governing body has written to all Premier League, Football League and Conference Premier sides as they attempt to address the issue after a sharp increase in the number of clubs charged for failure to control their players.

Chelsea were criticised for surrounding referee Bjorn Kuipers following a challenge from Zlatan Ibrahimovic on Diego Costa during the second leg of their UEFA Champions League last 16 tie, which resulted in the Paris Saint-Germain striker being sent off.

And Dyke has called for players to show more respect towards officials.

He said: "We have seen a pretty scary increase this season in the number of clubs charged with their players surrounding referees.

"As a result we have written to the clubs in the top five divisions reminding them of the rules and their responsibilities.

"I believe it is particularly important for professional clubs to set an example so that this kind of conduct is not replicated at grassroots and youth level.

"The whole game needs to ensure it is addressing this issue."