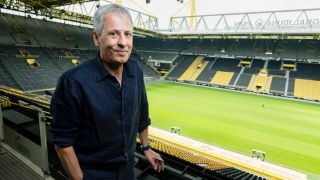 Former Nice head coach Favre fronted his first media conference on Friday following his appointment on a two-year contract in May.

BVB initially identified the experienced Swiss as their preferred candidate 12 months ago and finally landed their man after a tumultuous season saw the sacking of Peter Bosz and departure of successor Peter Stoger.

Watzke insisted it would "certainly take more than one transfer period" for Favre to return the club to the heights of their back-to-back Bundesliga glories in 2011 and 2012.

"We don't dream of a title, but we remain highly ambitious," Watzke told reporters.

"We are aiming to qualify for the Champions League this season. We need to allow ourselves time. We need patience."

Favre, who has had previous Bundesliga stints in charge of Hertha Berlin and Borussia Monchengladbach, arrives with a reputation enhanced by his time in Ligue 1.

The 60-year-old guided Nice into the top eight in each of his two seasons in charge and received praise for getting the best out of Mario Balotelli, but said the lure of his new club was too strong to turn down.

"If BVB comes, you cannot refuse as a coach," he said. "It's a big challenge, it'll be exciting. I'm looking forward to it."