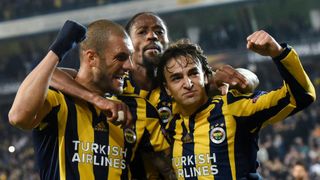 Ten-man Fenerbahce booked their place in the last 32 of the Europa League despite Kris Commons' late equaliser earning Celtic a 1-1 draw at the Sukru Saracoglu Stadium on Thursday.

Vitor Pereira's men knew a point would be enough to progress from Group A, but the result in Istanbul was rendered meaningless in the end as Ajax failed to beat Molde in Amsterdam.

Commons cancelled out Lazar Markovic's opener 15 minutes from time as the Scottish champions salvaged some pride from a poor European campaign.

The visitors were already consigned to bottom spot following their 2-1 defeat to Ajax last time out and fell behind when Liverpool loanee Markovic opened his account for the Turkish club before half-time.

Fener had Robin van Persie missing with a thigh injury and Nani and Simon Kjaer were suspended - their task made harder by Diego's needless dismissal for kicking out at Stefan Johansen 23 minutes from time.

But Celtic were unable to pick up a first win of the group that could have sent Fenerbahce out had Ajax beaten Molde - Pereira's men wrapping up second place behind Molde in their 200th UEFA outing.

Eager to make sure of their progression, Fener started brightly and saw Craig Gordon tip Mehmet Topal's effort onto the post three minutes in before tempers flared in a lively opening 10 minutes.

Diego took exception to Johansen's persistent tackling - the pair squaring up and each receiving a booking.

Celtic gradually grew into the game and Fener needed a last-ditch challenge from Abdoulaye Ba to deny Nadir Ciftci a one-on-one with Fabiano.

Gordon denied Diego and Souza with a tremendous double save before the half-hour mark, but a rare mishap from the Celtic goalkeeper allowed the hosts to take a deserved lead six minutes before half-time.

The Scot failed to deal with Gokhan Gonul's long ball over the top, allowing Markovic to nip in and roll the ball home despite the attempts of Johansen, Jozo Simunovic and Dedryck Boyata.

The second period began with a Fener attack - the hosts in confident mood and eager to extend their lead - but a slip from Alper Potuk allowed Boyata to clear the danger.

Potuk was unable to get a shot away after great work down the left from Markovic, while a rare foray forward for Celtic prompted Fabiano to rush out and deny Ciftci an effort on goal.

Diego's straight red card for petulantly kicking out at Johansen off the ball in front of the referee looked as though it may cost Fener when Commons glanced captain Mikael Lustig's cross home from inside the box.

The hosts held firm however, amid late Celtic pressure, with Ajax's failure to beat Molde ultimately ensuring Fener progress regardless.