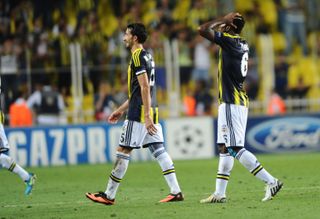 The Turkish Super Lig outfit will be unable to play in any continental competition until 2015-16 after being found guilty of match-fixing in the 2010-11 season, a campaign in which they won the title.

They were initially handed a three-year ban from European football by UEFA, but subsequently saw that reduced to two on appeal.

Fenerbahce still chose to challenge the punishment and took the case to the Court of Arbitration for Sport (CAS), who allowed them to compete in UEFA Champions League qualifying rounds while the case was being heard.

Ersun Yanal's side ultimately lost 5-0 to Arsenal over two legs in their Champions League play-off, with the second leg taking place on Tuesday, but they were set to drop into the UEFA Europa League.

However, CAS has now upheld their initial ban, meaning that the club will be expelled from all European competition.

Announcing their findings on Wednesday, a statement from CAS confirmed: "A two-day hearing was held at the CAS headquarters on 21 and 22 August 2013.

"Pursuant to the UEFA decision, which is now confirmed by the CAS, Fenerbahce SK is excluded from two editions of the UEFA club competitions."

Meanwhile, CAS also announced that an appeal by Metalist Kharkiv over a ban from European competitions in 2013-2014 has formally been dismissed.

The Ukrainian side were thrown out of the Champions League and replaced by Greece's PAOK after being found guilty of match-fixing.

Metalist had been due to face Schalke in the play-off round of the competition but CAS dismissed two requests for a suspension of the sanction until their case was heard.

However, the original ban has now been upheld.