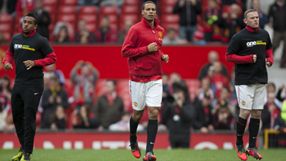 On Friday, Ferguson said his players would be wearing the shirts in their warm-up to lend support to an awareness week for the Kick it Out anti-racism organisation despite some black players threatening to boycott it.

Ferdinand's brother Anton was at the centre of a court case this year where former England skipper John Terry was accused of racially abusing him.

While Chelsea captain Terry was found not guilty, he still received a four-match ban from the English Football Association.

"At the press conference yesterday I spoke to the press about it. It is embarrassing for me. He will be dealt with, no doubt about that," Ferguson told Sky Sports in reference to Rio.

"I'm disappointed. We did that in support of the PFA [Professional Footballers' Association] and every player in the country should have adhered to that.

"We're all wearing the badges and he goes and lets us all down. We'll deal with it, don't worry."

Reading's Jason Roberts was criticised by Ferguson on Friday after the striker said he would not support the Kick It Out campaign given what he perceived to be a lack of progress in ridding the game of racism.