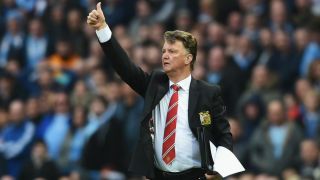 Former Manchester United manager Alex Ferguson insists Louis van Gaal will bring success to Old Trafford as long as the club are patient with him.

United have not won a major trophy since the Premier League title triumph in Ferguson's final season in 2012-13, and the FA Cup is their only realistic chance of silverware in a frustratingly inconsistent campaign so far.

With United out of the Champions League and Europa League and facing a battle to finish in the top four, pressure has mounted on Van Gaal's position, with talk of Jose Mourinho replacing him before next season refusing to die down.

Ferguson, however, says a crippling injury list has blighted his old club's chances of performing to expectations this term and is confident the current boss can deliver.

"It is dead easy to be critical," he told Sky Sports. "You have to be realistic about some things – the number of injuries he has had: Phil Jones has played only seven games this season, Ashley Young, [Antonio] Valencia, [Luke] Shaw, these are big losses. It doesn't matter which team you are, if you have players missing of that calibre it has to have an impact on the team.

"The other aspect which is always easy to forget there are also five new players in their first season at United, and two are young players in [Anthony] Martial and Memphis [Depay] and their promise is good.

"You have to have some patience being a Manchester United fan and they have shown that over the years; in Matt Busby's time, in my time. For 150 years of history it is worth having a couple of years on the quiet side of success because they will always come back and come back strong."

Ferguson is delighted with the faith Van Gaal has shown in United's academy prospects this season, specifically striker Marcus Rashford - a player he considers to be "a sensation".

"He's given nine young players their debut – I think the future is good," he added. "Rashford is an example of what I think is Manchester United. They are the one club in England who will always identify a Rashford and give a young kid a chance – there is no better club in England at giving young kids a chance.

"Rashford is a sensation and one of the best in years."