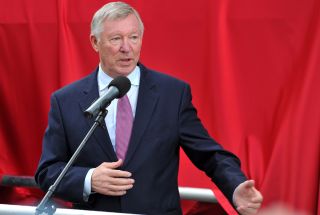 The Premier League champions sit ninth in the table after their first seven games, from which they have taken just 10 points.

Defeats to rivals Manchester City and Liverpool have underlined the club's early struggles, with David Moyes - who took over from Ferguson following his retirement in May - coming in for criticism.

And - speaking outside Old Trafford at an event to mark the renaming of nearby Water's Reach road to 'Sir Alex Ferguson Way' - the Scot stressed his view that the club will remain at the top of English football.

"It's a great, great football club. And I still think that a lot of our young fans don't remember that there were bad days," he said.

"Dealing with bad days is what we're good at. This club will always go on.

"We've got a fantastic set-up, great staff, wonderful people and there's only one way and that's up for Manchester United."