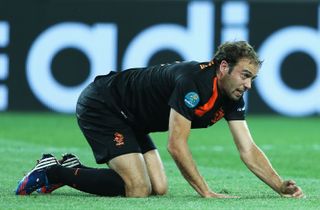 Mathijsen left the pitch in the 54th minute with his side 2-0 down, the 33-year-old being substituted after being hit in the face with the ball.

This led to speculation that the Netherlands international was suffering with vision problems, but Feyenoord have denied these reports while confirming the former Malaga man had sustained a mild concussion.

"Tests have shown the defender only has bleeding in his eye," a statement on the club's official website read.

"As a result, Mathijsen will have at least ten days off, making him unavailable for the home match against Vitesse on Friday."

Mathijsen has made 14 league appearances for Feyenoord this season, and his absence against title rivals Vitesse will be a big blow to manager Ronald Koeman.