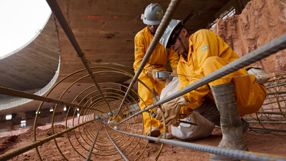 The tournament is considered a dress-rehearsal for the World Cup that Brazil is hosting the following year at 12 stadiums which are being upgraded or rebuilt from scratch in Brazil's largest cities.

"At this pace, we are not going to have six stadiums ready for the Confederations Cup," he told reporters after visiting the 66,800-capacity Minerao stadium (pictured), home to Atletico Mineiro and Cruzeiro.

The Belo Horizonte stadium has more than 80 percent of its upgrade completed and is the closest to being ready, along with Fortaleza's Castelao stadium.

Recife's Arena Pernambuco is the main concern for the Confederation Cup organisers. Only 64 percent of the construction has been completed just eight months from the tournament, according to contractor Odebrecht Infraestructura.

Valcke was briefly declared a persona non grata by the Brazilian government in March for saying Brazil needed a "kick up the backside" to speed up preparations for the World Cup.

His remark severely strained relations between FIFA and Brazil, though they have since improved. Valcke, on a trip to check work on the stadiums with Sports Minister Aldo Rebelo, said they were working together to get things done on time.

But even the Brazilian minister could not guarantee delivery on time.

"We don't have a single stadium ready for the Confederations Cup. We have deadlines. Stadiums that are on schedule will host matches, those that don't make the deadline won't," Rebelo said.

The other venues chosen for the Confederations Cup are Salvador's Fonte Nova stadium, Rio de Janeiro's famous Maracana and Brasilia's Mane Garrincha stadium which is being totally rebuilt.

FIFA has given the six cities until mid-November to prove they are on track. If they are not, they could be dropped from the tournament. FIFA has contingency plans to play the matches in five or even four cities if necessary.

The Confederations Cup features FIFA's six regional champions along with the host nation and the World Cup holders.

Spain, Italy, Mexico, Uruguay, Japan and Tahiti have qualified for next year's tournament and will be joined by the winners of the Africa Cup of Nations.

Brazil will kick off the tournament in Brasilia on June 15 and the final will be played at Maracana on June 30.