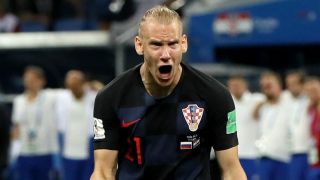 Vida was on the scoresheet with an extra-time header as Croatia triumphed on penalties following a thrilling 2-2 draw in Sochi on Saturday, booking a semi-final clash against England.

But the Besiktas defender could be sanctioned prior to that game with FIFA looking into comments he seemingly made in a social media video.

Appearing alongside former Croatia international Ognjen Vukojevic - with whom he played at Dynamo Kiev - Vida said: "Glory to Ukraine."

The phrase has been used by Ukrainian anti-Russian nationalists, with Vukojevic adding: "This victory is for Dynamo and Ukraine."

Vida's fate is now in FIFA's hands, with the body examining the incident.

"FIFA is processing the different reports of the said match as well as potential evidence concerning the matter," FIFA said in a statement released to Omnisport.

"Please understand, until we have evaluated all information available, we cannot comment further."

FIFA's disciplinary code prohibits "political slogans in any form" with "anyone who provokes the general public during a match" facing a two-match ban.

Switzerland players including Xherdan Shaqiri were fined but not banned for making hand gestures resembling an eagle, a symbol of Albania, against Serbia earlier in the World Cup.