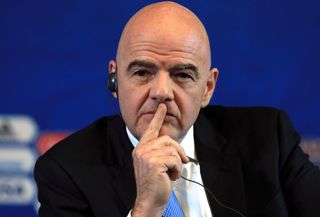 FIFA president Gianni Infantino has called for “new, stronger and more effective ways to eradicate racism in football” in the wake of the abuse suffered by England players during their Euro 2020 qualifier in Bulgaria.

UEFA has opened disciplinary proceedings against Bulgaria and England following Monday’s match in Sofia, which was stopped twice as Bulgarian fans made Nazi salutes and directed monkey noises at black England players.

Charges against the Bulgarian Football Union (BFU) include the racist behaviour, throwing of objects and disruption of a national anthem by home supporters, and showing replays on a giant screen.

The English Football Association has been charged with disruption of a national anthem, as well as providing an insufficient number of travelling stewards.

Infantino said in a statement: “I call on all football governing bodies to join us and think together of new, stronger and more effective ways to eradicate racism in football.

“As a starting point, I suggest that all competition organisers enact regulations which envisage life bans from stadiums for those who are found guilty of racist behaviour at a football match. FIFA can then enforce such bans at a worldwide level.”