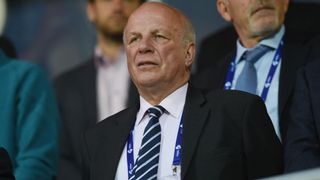 Blatter is one of several officials suspended by world football's governing body, which is subject to an FBI investigation.

The Swiss was handed a provisional 90-day ban pending an investigation into an alleged "disloyal payment" made by FIFA to Michel Platini, which he authorised in 2011, and has since been suspended for eight years.

His replacement is set to be elected in February, but Dyke does not think they will be granted as much control as Blatter was, with reform taking precedence.

"I am confident it [reform] can happen, am I confident it will? It will certainly happen, but whether we get enough reform remains to be seen. This is a corrupted organisation that desperately needs reform," he said.

"I think the reform is more important than who wins the presidential election. I don't think you're ever going to see a Blatter again – this all-powerful figure who runs every part of it and controls all the money and manages to dosh it around as if it was his. I think those days are gone.

"Whether you can rebuild it and give it credibility again as an organization we will have to see."

FIFA vice-president Platini was considered the leading candidate to replace Blatter and had the support of the FA, but the Frenchman also received an eight-year ban from the organisation.

Dyke said discussions will take place at the FA as it prepares to back another candidate.

"The FA board will discuss that later this month and we will decide then," he added.