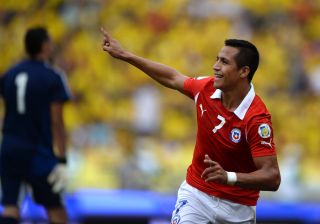 Chile blitzed the home side early to lead 3-0 before the half-hour mark with Barcelona forward Alexis Sanchez central to the visitors' start as he scored his team's second and third goals.

But a red card to Chilean midfielder Carlos Carmona in the 66th minute allowed Colombia to recover with Teofilo Gutierrez scoring the home side's first three minutes later before James Rodriguez was fouled in the box on two occasions and, both times, Falcao converted from the spot.

The draw saw Colombia move to 27 points and ensured they will be a part of Brazil 2014 - the first time they have qualified for a World Cup since France 1998.

Meanwhile, Chile missed the opportunity to qualify and will need to claim at least a point at home against Ecuador on the final matchday in South American qualifying to secure a berth at next year's tournament.

Chile started brilliantly with Arturo Vidal putting the visitors ahead at the Estadio Metropolitano Roberto Melendez in Barranquilla in the 19th minute from the penalty spot after Eduardo Vargas had been brought down in the area by David Ospina.

Just three minutes later and Jorge Valdivia set up Sanchez for Chile's second and the visitors were flying in the 29th minute when the Barcelona striker struck again, finishing off Marcos Gonzalez's pass.

The game turned around after the hour mark as Carmona received his second yellow card for halting a Colombia counter-attack by handling the ball.

Soon after Gutierrez struck from Pablo Armero's cut-back and in the 73rd minute Rodriguez went down easily under pressure from Francisco Silva and Falcao scored to make it 3-2.

Colombia's comeback was complete in the 84th minute when Rodriguez was brought down by Chilean goalkeeper Claudio Bravo and Falcao again made no mistake from the spot.

The result leaves Chile with 25 points and in the fourth and last automatic qualifying position in South America.

If the Ecuadorians draw with Chile on Tuesday they will both qualify for Brazil, while Uruguay will be consigned to an intercontinental playoff against Jordan.