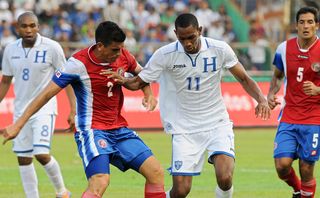 Jerry Bengtson scored the only goal of the game to take Honduras to 14 points in CONCACAF's final round of World Cup qualifying, six points clear of both Panama and Mexico, who are set to play later on Friday.

If Mexico and Panama draw, Honduras will qualify for next year's World Cup finals, while if either of those teams win, the Hondurans will need just a point away to bottom side Jamaica to secure a berth at Brazil 2014.

In a tight clash between second-placed Costa Rica and home side Honduras, the hosts dominated with nine shots on goal to the visitors' two but had to wait until the 65th minute to hit the back of the net.

Midfielder Roger Espinoza showed good strength to hold off an opponent and then slid the ball through the middle of Costa Rica's defence to Bengtson, who finished first time past visiting goalkeeper Keylor Navas.

Bengtson's fourth goal in qualifying extended Honduras' unbeaten streak to three games and means they are on the verge of reaching their second consecutive World Cup finals.