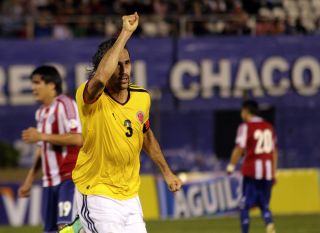 Central defender Mario Yepes scored both goals for Colombia, who lost Fredy Guarin to a second yellow card in the 32nd minute with Paraguay leading 1-0.

A terrible error from Colombia goalkeeper David Ospina allowed Jorge Rojas to give the home side the lead after just six minutes but Yepes' goals either side of half-time, both set-up by free-kicks from James Rodriguez, ensured the visitors took all three points in the CONMEBOL dead rubber.

Although the victory ensured Colombia finished second in South America's qualifying group for next year's World Cup finals, the match in Asuncion meant little, as Jose Pekerman's side had already secured qualification, while Paraguay were out of contention.

Paraguay started the game 10 points behind fifth-placed Uruguay, who occupied the play-off berth in CONMEBOL's standings.

But the hosts began promisingly with Rojas shooting just wide from long range in the fifth minute.

Colombia did not heed the warning from Rojas and two minutes later the Benfica B winger skipped past one opponent and then unleashed another rocket, which was deflected and then wriggled under Ospina, who should have held onto the save.

After going behind, Colombia took around 10 minutes to recover, before first Rodriguez and then Jackson Martinez went close to scoring.

Colombia's hopes of a comeback were dealt a blow in the 32nd minute as Guarin received his second yellow card for tripping Sergio Aquino in the centre circle as Paraguay attempted to break.

But with seven minutes remaining in the first half, the visitors equalised with Rodriguez's in-swinging free-kick from the right picking out Yepes, who headed home unmarked.

Paraguay had the first chance after the break with Roque Santa Cruz's rasping shot pushed away by Ospina at the near post and in the 57th minute, Colombia took the lead thanks to Yepes.

Rodriguez's free-kick was initially headed away by the Paraguayan defence but Carlos Bacca collected the loose ball and his shot was well saved by Justo Villar, only for Yepes to tap home the rebound.

While Martinez missed two one-on-one opportunities for Colombia late in the match, the visitors held on to complete their first successful World Cup qualifying campaign in 16 years in style.