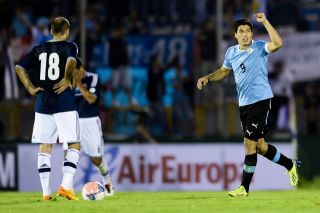 Oscar Tabarez's men were unable to secure a big enough victory against an under-strength Argentina, finishing fifth in the CONMEBOL qualifying group.

They will need to overcome Jordan in a two-legged play-off in November to reach Brazil 2014.

Maxi Rodriguez cancelled out two Uruguay leads in the first half after Cristian Rodriguez and Luis Suarez had put the hosts ahead.

Edinson Cavani's effort early in the second half gave Uruguay hope of overhauling Ecuador on goal difference, but they failed to find another goal.

Uruguay made the livelier start in front of their home fans at the Estadio Centenario and it was no surprise when they took a sixth-minute lead.

Suarez's flat set-piece from the right caused problems in the area and eventually fell to Cristian Rodriguez at the back post.

The Atletico Madrid attacker's first touch set up his chance before he fired past Sergio Romero and into the top corner.

But the hosts were only ahead for nine minutes as Maxi Rodriguez levelled for Argentina.

Rodrigo Palacio did the hard work down the left and crossed for Augusto Fernandez, who cushioned down the pass for Maxi Rodriguez to find the bottom corner.

Romero got down well to keep out Cavani before Uruguay were awarded a controversial penalty on 33 minutes.

Suarez went down under the softest of contact from Sebastian Dominguez before converting the penalty, despite Romero diving to his right and almost keeping it out.

But Argentina again took no time in cancelling out the effort as Maxi Rodriguez cut in from the right before firing a powerful finish into the bottom corner.

Suarez's set-pieces caused the visitors problems throughout and Uruguay were unlucky not to go into the break ahead when Cavani headed a free-kick inches wide.

The chances continued to flow to start the second half as Cavani failed to get enough power on his header from a Suarez corner and Palacio struck an effort straight at Fernando Muslera.

The combination between Suarez and Cavani helped Uruguay take a 3-2 lead in the 49th minute.

Suarez was released into space down the left and squared a pass for Cavani, who took a touch before smashing a powerful finish past Romero.

Uruguay were somehow denied a two-goal lead in the 67th minute as they struck the woodwork twice.

Christian Stuani headed a Suarez corner against the crossbar before Cristian Rodriguez cut in from the right just minutes later to drill a left-footed strike into the post.

The hosts had other chances - Cristian Rodriguez hit the side-netting, Suarez was denied and they had a penalty shout for handball turned down - but missed opportunities will see them needing a play-off to qualify.