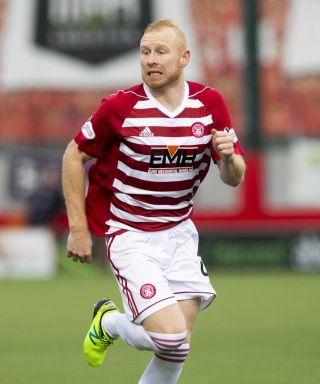 Hamilton’s Ziggy Gordon admits another year of fighting for survival in the Ladbrokes Premiership has left him stressed out.

Accies are looking to beat the drop and secure top-flight football for the sixth straight season.

But full-back Gordon confessed he is feeling the pressure, with Brian Rice’s side just two points above the relegation play-off slot.

The 26-year-old, who returned to the Hope Stadium last summer for his second Hamilton stint after two years away, has been in this position before.

His side have always found a way to claw themselves to safety but Gordon admits it is usually only after his nerves have been put through the wringer.

Speaking ahead of Saturday’s clash with Livingston, the former Partick Thistle stopper said: “The majority of the boys have been in this situation before so it’s nothing new to them.

“For others it’s a new experience and I hope it’s one they never have to go through again.

“Those younger guys will be looking to boys like myself, Darian MacKinnon who have been in this situation and know what it takes to get out.

“I’d be lying if I said the whole experience wasn’t stressful.

“I’m sure the manager and a lot of the other boys do the same.

“There is nothing else we can do other than working as hard as we can, as often as we can.

“I think it’s easier to deal with now than it was when I first joined the first team but I still don’t enjoy it in any way.

“We just have to get through it. We didn’t ask to be in this position. No team thinks at the start of the season they want to be sitting just a point or two above the relegation zone.”

Victory over Gary Holt’s Livi this weekend could see the threat of automatic relegation killed off if Dundee drop points to Motherwell.

That would then leave Rice’s men to worry about second-bottom St Mirren, but Gordon reckons his team have got the stomach for the relegation fight.

“I think we’ve got that mental toughness as a squad and as individuals,” he said. “Maybe there are some who don’t but they can rely on the experienced players to galvanise them and the rest. We won’t leave anyone behind.

“The gaffer keeps asserting to us that this is a three-horse race and we’re leading right now. As long as we don’t fall, we’ll get to the finish line first.”