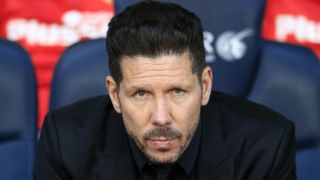 Simeone's side took the lead through Koke 10 minutes in before Lionel Messi and Luis Suarez put Barca in front before half-time.

And Atletico's plans unravelled further before the break as Filipe Luis was shown a straight red card for a high tackle on Messi that enraged the Barca bench.

Godin was shown a second yellow card for a late challenge on Suarez after the hour, but Simeone refused to blame the defeat on Atletico's numerical disadvantage.

"I'm proud of the team, we had a very good first half. We started with 10 in the second half and controlled the space and even with nine we kept our shape," the Argentinean told reporters.

"You can win or lose but I am proud. I do not think about referees, I only speak of the teams. The sending-off of Filipe Luis was a reading of the situation and the referee saw what he saw.

"I have nothing to reproach Godin or Luis Filipe for. It is not easy to maintain that intensity. We made it to 25 minutes and we had good possession and did not suffer vertigo.

"But Barca started to get into the game, had two chances and scored two goals as they are a very good team."

La Liga champions Barca now sit three points clear at the top with a game in hand after what could prove a decisive victory over their nearest challengers.

And Simeone acknowledged the title is Barca's to lose this season.

"Barcelona remain strong and are decisive in attack," he added. "They have a game in hand and are leaders. There is plenty of the league to come but they rarely lose.

"A defeat always hurts but the team continue to work and did not leave their philosophy even when playing with two men less."