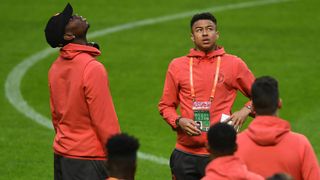 Phil Neville feels the likes of Marcus Rashford, Jesse Lingard and Paul Pogba will find the Europa League final particularly difficult after the attack in Manchester.

A minute's silence will be held prior to the match in Stockholm between Manchester United and Ajax, with the Premier League club and Jose Mourinho expressing their sadness in the build-up to the game.

Neville hopes the match will be able to provide some kind of relief to the city, but knows it will be a difficult experience, particularly for the homegrown players in United's squad.

"Players like Marcus Rashford and Jesse Lingard, they have been brought up in this city," Neville said to BBC Sport.

"Paul Pogba was brought up in the city from the age of 14. They will find it difficult.

"From what would be the biggest games of their careers - it doesn't feel important.

"It is now a game of football of 22 players and it should be enjoyed. Football, for 90 minutes, can bring a smile back on faces of people of Manchester."

Neville himself will work at the game as a pundit, but has lost the excitement of such a big occasion.

"When I was told I would be working on this match, it felt like it was like Christmas Day," he said.

"But I don't want to be at this game now, I want to be in Manchester."

Former United defender Rio Ferdinand echoed those thoughts, saying: "I am obviously devastated, Manchester's somewhere I have made home for 12 years, nearly 13, my kids were born here, made many friends there, still in contact with many of them.

"The character of the city has never been the question. If this had happened in any other city in England I think it would be the same solidarity, the same coming together, the same outcry because in this country we got people who show a sense of unity when the chips are down.

"[The match] is an opportunity for the players to show solidarity with Manchester. Playing after such an unforgiving and devastating act, I don't think it matters whether you are a red or you are a blue, you want these guys to go out and represent Manchester and show the togetherness this city has got.

"It will dawn on the players after that this is such a huge game, not only for Manchester United football club, but also for a player to show they can bring a community, a city, a country together by playing and showing that whatever goes on they will go out there and perform to the best of ability."