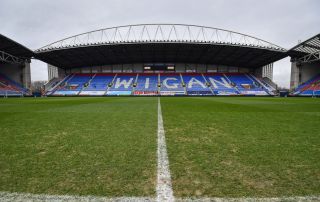 The administrators of Wigan say an investigation will take place in due course into how the club ended up in this position, but that the immediate priority is to find a buyer.

The Sky Bet Championship side were placed in administration on Wednesday and face a 12-point deduction, though when that sanction will be applied will depend on where Latics finish in the league.

A deal to sell the club from the Hong Kong-based International Entertainment Corporation (IEC) to the Next Leader Fund was only formally completed on June 4, and administrator Gerald Krasner of insolvency practitioner Begbies Traynor said that the events of the last few weeks must be looked at in time.

Asked how unusual a club being placed in administration four weeks after a sale was, he said: “I think that’s a first and that will have to be looked at in due course.

“But my priorities at the moment are to get this club sold and make sure we get to the end of the season so that there is a club next season.

“Every administration I’ve been involved in – and even Leeds United which wasn’t an administration – has its peculiarities. But I think four weeks is a record that will stand for some time.”

Krasner added: “It has been run in a good way but it’s lost a lot of money. They (the board) had a plan and the owners have said ‘we’re not putting any more money in’ hence I’m sat here today.”

Krasner said there had already been 12 expressions of interest, but he expected that number to fall once proof of funds were expected.

Former owner Dave Whelan, who sold to IEC in November 2018, said on Wednesday he would help out if he could, and Krasner said he was due to speak to Whelan’s grandson David Sharpe on Thursday to discuss what form that help might take.

“What we need is money, to put it basically,” Krasner said.

Much has been made of Wigan being the first club to enter administration since the start of the coronavirus crisis, but Krasner agreed it was too simplistic to solely blame the pandemic for what had happened.

“The coronavirus doesn’t help and whether that made the owners’ decision not to put money in, I don’t know,” he said. “But I don’t blame this entirely on the coronavirus. I think it’s just an element in the problem.”

Krasner said he had already apprised Latics manager Paul Cook of the situation and said he would not interfere in team matters.

The club are 14th at present with six games to go. If they finish outside the bottom three then the 12-point deduction – if not appealed – would apply to the 2019-20 table. If they are relegated, the deduction would apply at the start of their 2020-21 Sky Bet League One campaign instead.

Krasner did not rule out the possibility of an appeal, adding: “There are rights of appeal in unusual circumstances, it’s called force majeure.

“I’ve not yet had the letter from the Football League, I’ve seen what they have said publicly, but until I’ve seen the letter and consider it with my lawyers I’m not sure how we’re going to deal with this and I couldn’t possibly tell you today what’s going to happen.”

Wigan MP Lisa Nandy has written a strongly-worded open letter to the EFL, urging it to “reconsider the decision to penalise the club after failures of your making”.

The letter, which is published on www.wigantoday.net, read: “I am at a complete loss as to how, given the circumstances which are now coming to light, this ownership could have been approved.

“I am also appalled that having presided over this situation, a 12-point deduction will be given to Wigan Athletic which has further weakened our position at this critical moment.

“It is simply disgraceful that you have chosen to penalise our club for your own failures.

“I cannot express strongly enough how angry people feel about this. This has been shocking news for our town and all Latics supporters.

“Can you tell me how this new ownership model came to be approved, what tests were set and why they were deemed to be met?

“I am also asking you, in the strongest terms, to reconsider the decision to penalise the club after failures of your making.”