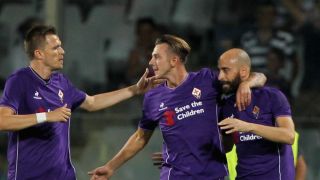 Barcelona suffered another defeat ahead of the new season, going down 2-1 at Fiorentina on Sunday in the International Champions Cup.

Barca fell to their third loss in the friendly competition, nine days ahead of their UEFA Super Cup meeting against Sevilla, as youngster Federico Bernardeschi netted twice in the opening 12 minutes.

After their shaky start, Barca - who were without superstars Lionel Messi and Neymar - slowly began to control proceedings but failed to find an equaliser after Luis Suarez had halved their deficit.

Chances fell to Pedro and Suarez as the European champions pressed, yet they were unable to find a way through, leaving Luis Enrique with plenty to ponder.

Barca's early defensive play will have worried their head coach as Bernardeschi was twice allowed to pounce on crosses from the right, giving Paulo Sousa an excellent start to his home debut as Fiorentina boss.

The young striker opened the scoring after four minutes with a well-placed header from a sumptuous Borja Valero cross.

Eight minutes later Joaquin found the 21-year-old unmarked 10 yards from goal and he again made no mistake with a cool, side-footed finish.

An action-packed start to proceedings showed no sign of abating as Suarez pulled a goal back for the visitors, the Uruguayan collecting a sublime cushioned volley from Ivan Rakitic before beating Ciprian Tatarusanu.

Pedro and Suarez were each guilty of wasting good openings to level before the break, the former wasteful on two occasions with weak shots from inside the penalty area.

And Barca were lucky not to fall further behind on the stroke of half-time when Bernardeschi went agonisingly close to claiming a hat-trick, the striker just about denied by Marc-Andre ter Stegen as the goalkeeper charged 40 yards out of his goal to deflect a long-range effort narrowly wide.

Valero and substitute Giuseppe Rossi - making his long-awaited comeback at Stadio Artemio Franchi after knee problems - could have strengthened Fiorentina's grip on the game in the second half, but their efforts were deflected over and Barca slowly began to gain control of proceedings.

A diving header from substitute Munir demanded a superb save from Tatarusanu to keep Fiorentina ahead, and the Romanian had to be alert again on the hour as Rafinha, Suarez and Pedro all peppered his goal.

Barca final chance came from an unusual source as Gerard Pique rose to meet a late corner from the left, his glancing header drifting wide as the 2014-15 treble winners fell to another pre-season loss.