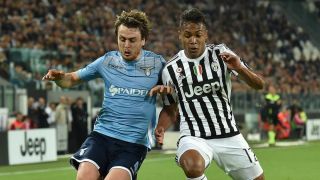 Alex Sandro has urged Juventus not to let their level drop against Fiorentina ahead of a round of fixtures that could see them clinch a fifth consecutive Serie A title.

Juve hold a nine-point lead at the top of the table and will seal the Scudetto should Napoli fail to match their result when Maurizio Sarri's men visit Roma on Monday.

But first Juve, whose 3-0 win over Lazio on Wednesday marked their eighth consecutive league victory, must overcome a tricky away trip to the Stadio Artemio Franchi.

Alex Sandro told Juve's official website: "We've approached every game in our run-in as if it were a final and it will be no different against Fiorentina this weekend.

"Every point is precious at this stage of the season. In the final rush to the finish line, we can't afford to let our performances slip or think about anything other than winning.

"We're doing exactly what is required at the moment and the good results are the fruit of the whole squad's great work in the last few months.

"I believed right from the start that we would have a successful season one way or another. Whenever I have spoken about our prospects, I have always said that we have the quality to win the league.

"Now it is up to us to give our all and make sure we become champions as soon as possible."

Fifth-placed Fiorentina's hopes of qualifying for the Champions League appear to be all but over, Paulo Sousa's side are nine points adrift of Roma and will be out of the running for Europe's premier club competition if they are unable to match the capital club's result against Napoli.

Sousa knows the importance of games with Juve to the Fiorentina fans and said after a 2-1 loss to Udinese: "This weekend is a big game with Juventus and one that the fans care about a great deal. The way we worked physically was good preparation for Sunday."

Fiorentina lost midfielder Matias Vecino to a muscle problem in the defeat at Udinese and he will also miss the visit of Juve, although the issue is not believed to be serious. Khouma Babacar (abductor tear) and Panagiotis Kone (muscle) are due back in action soon.

Giorgio Chiellini (abductor tear) and Roberto Pereyra (muscle) are back in training but this match could come too soon for the pair.

Leonardo Bonucci and Stefano Sturaro are suspended, with the latter also suffering from the mumps.

- Fiorentina have lost 71 games and conceded 250 goals against Juventus; their worst opponent in Serie A.
-Fiorentina have won only one of their last 15 league games against Juventus (D6, L8).
-The only Fiorentina win against Juventus in the 21st century was a 4-2 victory in October 2013, the last Serie A game lost by Juventus after holding a 2-0 lead.
-Before the reverse fixture Juventus were five points behind Fiorentina, now they are 23 points ahead.
-Juventus have conceded only two goals in their last 15 league games, both away from home.
-Juventus (288) and Fiorentina (311) have conceded the fewest shots in the Serie A 2015/16.
-Dybala is the youngest player in the top five European Leagues to have a hand in more than 20 goals (16 goals, eight assists).