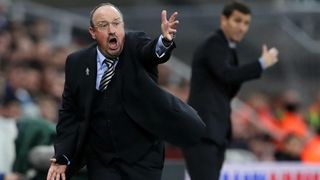 Rafael Benitez is convinced Newcastle United's 10-match winless run to start the season was harsh on the team after they finally got a first triumph over Watford on Saturday.

Newcastle claimed just three points from their first 10 Premier League games and had been looking destined for a long and arduous campaign.

But they put in a dogged display at St James' Park despite seeing three players go off injured – Ayoze Perez getting the winner having been jeered by supporters last time out.

Benitez is adamant their winless run went on longer than his players deserved, however, and he acknowledged that victory brought relief.

He told reporters: "I will say that so many games, there were so many things that we were trying to do in a different way with players, analysing everything, and still we couldn't get three points when I think we deserved to get the three points in a couple of games or maybe more – Cardiff City, Manchester United, Brighton [and Hove Albion], they were very clear.

"It was a pity, but today we won. There's a little bit of relief and we can enjoy it, but keep working hard because Bournemouth [their next opponents] are also another team that is in form and it will be difficult.

"The fans have been fantastic during the whole season and today was another example. The players are giving everything. We are making mistakes, starting from me, but still we are trying our best and the fans appreciate that.

"You could see even in the worst situation, still they were behind the team. Now we have to enjoy it and relax a little bit."

Watford coach Javi Gracia was disappointed with his team's inability to finish their chances when in the ascendancy, though he refused to criticise the players.

"If you don't score, if you don't kill the game when you have the chance to do it, you know afterwards something like today maybe can happen," the Spaniard said.