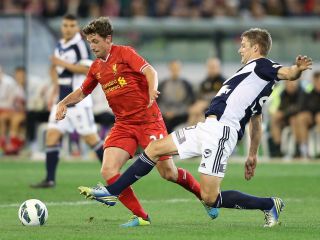 The Wales international came on as a late substitute against West Brom last weekend after two months on the sidelines with a hamstring injury.

Brendan Rodgers' side have made a fine start to the season in his absence and sit third in the Premier League ahead of Saturday's trip to leaders Arsenal.

Allen is expected to be on the bench again at the Emirates Stadium, but has vowed to do all he can to earn a recall.

"It's a challenge you have to relish as a professional footballer," he told Liverpoolfc.com.

"It's been a great start to the season and we're playing really well, so that makes the competition even harder.

"The atmosphere is great. We're towards the top of the table and that's where we want to be. We know it's a massive competition up there and there are some very strong clubs."

The former Swansea man added: "I think when you've had a little bit of a lay-off, you miss a little bit of that sharpness and your match fitness is obviously a little bit down, but I'm working on that and I'm getting back to where I want to be.

"The idea is to get more minutes on the pitch. I've just got to make sure I train hard and put my name forward for selection as much as I can."