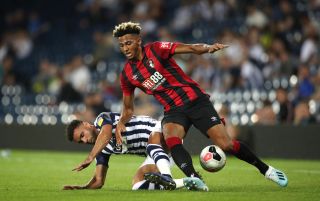 England Under-21 defender Lloyd Kelly believes he is ready for an imminent Bournemouth debut after stepping up his comeback from injury sustained in pre-season.

Full-back Kelly cost the Cherries a reported £13million from Bristol City in May but suffered ankle ligament damage before the start of the Premier League campaign.

“I’m very close (to being available for the first team). I’ve got a lot of minutes in the bank, feeling good, so hopefully I should be in contention the next game or so,” Kelly told afcbtv.

“Getting injured a week before the season started was a bit of a downer from having a good pre-season with this team, but I’ve now come through the other side and looking forward to pushing on.”

Bournemouth travel to south-coast neighbours Southampton on Friday night, while manager Eddie Howe may view Wednesday’s Carabao Cup trip to League One Burton as a perfect opportunity to hand Kelly his first appearance for the club.

Cherries captain Simon Francis, who has not featured for the club since rupturing the anterior cruciate ligament in his right knee on Boxing Day, also played just over an hour against eighth-tier Basingstoke.

Speaking about his team-mate, Kelly added: “Obviously he’s been out for quite a while and it was a long time coming for him to get back out on the grass.

“It was a good moment for both of us to get back out there and I’m sure he’s buzzing with how he played and got through the other side as well.”