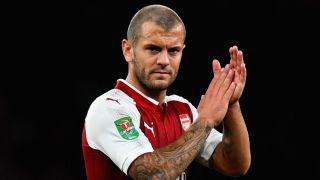 Arsene Wenger believes Jack Wilshere is "on his way back to his best" after the midfielder impressed in Arsenal's 4-2 Europa League victory over BATE.

The England international played the entire game in Belarus on Thursday, as the Premier League club made it two wins from two in the group stages of the competition.

Wilshere is in the final year of his contract with Arsenal, having spent last season on loan with Bournemouth after a series of injuries stalled his career at the Emirates Stadium.

However, Wenger believes the future remains bright for the talented 25-year-old – provided he can stay healthy.

"He had an outstanding first half," said the Gunners boss.

"He fights until the end. He's on his way back to his best and showed that.

"He's at an age where a player normally gets to the best of his career. He's on the way up. He's only been stopped by a series of injuries.

"Hopefully, I just pray, he is not hampered by any more problems and that will see him getting stronger and stronger. He's shown again that he's not lost his football."

Wilshere has not made a Premier League appearance this season, but was an unused substitute for Monday's 2-0 home win over West Brom.