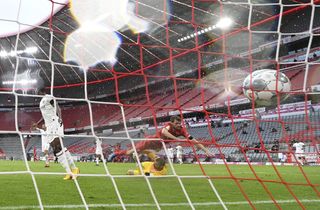 Bayern Munich maintained their four-point lead at the top of the Bundesliga after an entertaining 5-2 win over Eintracht Frankfurt.

Goals from Leon Goretzka, Thomas Muller, Robert Lewandowski and Aphonso Davies did the damage – along with a Martin Hinteregger own goal – as Borussia Dortmund are kept at arm’s length ahead of Tuesday’s crunch meeting that could have a big say in the title race.

Indeed, if Hansi Flick’s men can beat Dortmund they will take a massive step towards an eighth successive Bundesliga crown.

But their lax defending from set-pieces will be a cause for concern as two Hinteregger goals at the right end for Frankfurt in the space of four second-half minutes briefly threatened to derail the hosts’ evening.

Frankfurt have been troublesome opponents for Bayern this season as it was Frankfurt’s 5-1 win in November’s reverse fixture game that prompted the sacking of Niko Kovac.

But there was never really any chance of a repeat, even with the Allianz Arena eerily empty.

The writing was on the wall in the opening 15 minutes as Bayern wasted two chances to go in front, first Lewandowksi thundering an effort into the crossbar from a corner and then Benjamin Pavard heading straight at Kevin Trapp when it seemed easier to score.

The opener eventually came in the 17th minute and it was a fine move as Muller was set free down the left and he pulled it back for Goretzka, who arrived late in the area with a classy finish.

It was total home domination but Bayern had to wait until the 41st minute to double their lead.

Davies had space on the left and found Muller, who tucked it away well, with the goal allowed to stand after a lengthy VAR check.

When Lewandowski scored his 42nd goal of the season just 45 seconds after the restart, Frankfurt would have been fearing the worst.

The Poland striker powered home a header from Kingsley Coman’s cross to put his side three up.

But Bayern’s vulnerability from corners was highlighted twice in the space of four minutes as Frankfurt hauled themselves back into the game.

First Hinteregger converted at the second attempt after he was inexplicably allowed to retrieve his first header and then from their next attack, the defender sent in a glancing header after no one tracked his run.

But just after the hour, Bayern calmed their nerves and re-established their grip on the game, as Davies fired home from inside the area.

It became something of a rout 16 minutes from time when Hinteregger got his feet tangled after Serge Gnabry closed in on goal and put the ball into his own net.