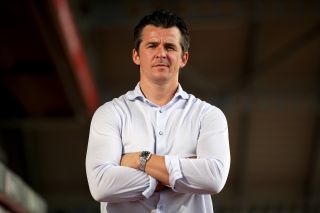 Fleetwood manager Joey Barton claims it would be “out of order” to settle Sky Bet League One on a points-per-game basis.

Barton’s side were fifth in the table when the coronavirus pandemic forced a sporting shutdown but just six points separate the third and eighth-placed teams in the division, with different teams playing different numbers of games.

While League Two clubs have voted to draw an early end to their season, there is no sense of unanimity one step up. Peterborough owner Darragh MacAnthony has already spoken up on behalf of six clubs involved in the promotion and relegation battle and outlined their strong desire to play on.

“We’ve got Sunderland, Peterborough and Wycombe all scrapping for one play-off place. It looks like Wycombe are going to get it if they go points-per-game,” Barton told Matchroom Boxing’s Talk the Talk YouTube show.

“Darragh MacAnthony is alluding he’s going to go bizarre. I’d go nuts as well. It’s out of order. We’ve got to finish the league.”

Barton went on to outline his fears for both the livelihoods of players and the ongoing viability of some clubs if the break in competitive action continued in open ended fashion.

A series of high-profile players in the Premier League, including Sergio Aguero, Willian, Raheem Sterling, Troy Deeney and Glenn Murray, have expressed safety concerns but Barton’s gut instinct is that the majority of those lower down the ladder want and need to return.

“I’ve got a lot of lads in our care who want to play. They don’t have a surplus amount of cash in the bank and a lot of them live week to week to month to month,” he said.

“You’ve got 1,400 players in the lower leagues out of contract. They’ve got no money in the bank, kids to put in school, mortgages to pay and cars to pay for.

“If the Premier League boys don’t want to go back because they don’t feel safe and have got the money to be able to do that, no problem, I’m not forcing anyone.

“But a lot of clubs need to get on with it. Some clubs won’t survive. The working class that football is…we need to crack on if it’s safe to do so.

“At some point we have to return to normality because if we don’t at some point the economy will fail and the football economy is already creaking now.”

Barton is happy to let his actions do the talking by getting back on the training pitch, dressing room or dugout.

He added: “We’ve got to get moving is my take. I’m happy to take that calculated risk based on everything I’ve been told about testing, about the distancing in place.

“If we don’t get back moving what are we going to do? Just sit and stay in our house and watch people go out of business.”