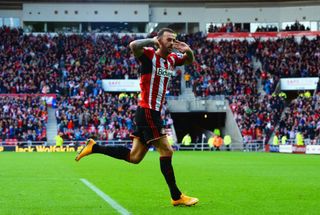 The Scotland international was left out of Gus Poyet's squad for the Premier League clash with Tottenham last month, but returned to the starting line-up against Mark Hughes' side at the weekend.

Fletcher revealed he was furious at being overlooked by Poyet for the draw with Tottenham and was thrilled to prove a point by scoring his first goals this year in a 3-1 victory at the Stadium of Light.

He told the Echo: "Obviously you want to play every game.

"If you're not playing, you at least want to be on the bench.

"So I'm not going to say I was happy about it [being left out against Tottenham]. I was angry.

"But I think I’ve proven that I should have been somewhere near the squad, so hopefully that will continue.

"The manager wanted a reaction and he got a positive reaction, which was good."

The former Burnley and Wolves frontman admitted it was a relief to find the net after a long barren spell that saw him troubled by injuries.

“I was happy with the win and to get the goals as well was good," he added.

"It's been frustrating. Personally, I think I've been doing quite well in training, but when you're not in the squads and stuff, it’s frustrating.

"If you don't score goals, you get stick. You’re not just going to take that.

"But I'm glad I've got off the mark. It’s been a long time coming with injuries and stuff."