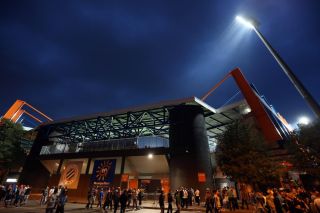 Adverse weather overnight in Montpellier caused flooding at the stadium, with the pitch, seating area and backroom facilities all affected.

The club released a statement on their official website stating that La Mosson would now be closed for several weeks as they go about repairing the damage.

No confirmation has yet been given as to where Montpellier will host their next Ligue 1 fixture with Lyon on October 19 after the international break.

Montpellier's home Coupe de la Ligue tie with Ajaccio may also be reversed, while a planned ceremony to celebrate the club's 40th anniversary in November has been cancelled.

Temporary moves to Beziers, Istres or Nimes have also been mooted.