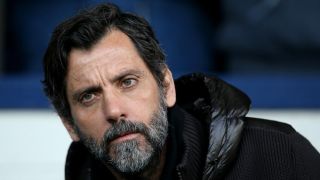 Gomes twice denied Saido Berahino to write his name in the history books as the first goalkeeper to make two penalty saves in the Premier League in two separate matches.

Watford passed the 40-point mark thanks to their first win in seven Premier League fixtures – secured by Ben Watson's first-half goal – ahead of their FA Cup semi-final against Crystal Palace next weekend and Flores was grateful to Gomes.

"I think it is really important, because 41 points is very close to [survival], so it is very nice," Flores told BBC Sport.

"It was amazing, he had an amazing performance, he made amazing saves. It was all his own decisions. He has information from the goalkeeper coach, of course, but players decide.

"He is a specialist and we are really happy with the performance of Heurelho because he has the spirit of this team. This team plays really well this season, we fight a lot, but we have one of our main players in the goal in Heurelho."

Flores accepted that the game was "strange" with little quality shown in front of goal by either side.

"It was a really strange match, not too much football, both teams didn't play very well," he said.

"We have a lot of problems at the moment to try to conserve the ball. I think the best thing we did is to control the spaces for West Brom. When we have the ball we need more good passes if we want to create chances.

"I am not sure if [41 points] is enough or not, but what is important is that we keep positive. We need to improve, we can improve, we have to play five matches more in the Premier League and the semi-final and it is important to win."