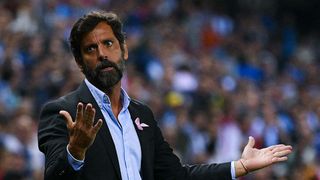 Quique Sanchez Flores intends to turn down a move to Stoke City and stay at Espanyol.

Former Watford boss Flores was tipped to take over from Mark Hughes, sacked after an FA Cup third-round exit at fourth-tier side Coventry City last weekend.

Stoke, 18th in the Premier League, hoped to agree a deal for the Spaniard, but he has opted against a return to England and will instead remain at Espanyol.

"I am the coach of Espanyol and will continue to be," Flores told a media conference on Saturday. "I belong to Espanyol. I have nothing to explain.

"The reality is that clubs are interested in players and coaches. What matters is that Gerard [Moreno] is here and I am here.

"The facts are what matter and nothing else. And the fact is that the players do not want to leave, and the coach continues.

"Football brings these types of situations. We feel good and it is very difficult for someone to leave.

"We have to enjoy this spell for Espanyol. We have won in LaLiga, progressed in the Copa del Rey – there are many reasons to be happy."

Martin O'Neill is the frontrunner to take over at the bet365 Stadium, with Stoke travelling to Manchester United on Monday.