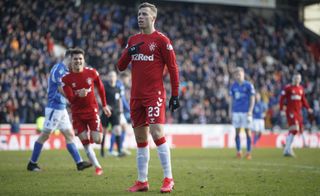 Florian Kamberi said he could take little comfort from his own inspirational performance for Rangers after his team dropped more Ladbrokes Premiership points on Sunday.

Rangers slipped 12 points behind Celtic after being held to a 2-2 draw against St Johnstone in Perth despite Kamberi’s heroics.

The half-time substitute levelled with a brilliant volley inside five minutes of coming on and later set up Joe Aribo to net following an impressive turn and cross.

But his first goal for Rangers and subsequent piece of skill ultimately only secured his team a point after Stevie May hit a late equaliser.

“I planned to celebrate this win with my goal and assist but unfortunately we couldn’t get the three points, so I can’t be happy,” the Albania international said.

“It’s frustrating not just for me, for everybody, for the supporters. Everybody came here to win, not to draw. So I’m happy with the performance but I can’t be as happy as I want because we couldn’t win.

“The plan is to keep clean sheets and it’s not always easy to come back. And it wasn’t easy on that pitch.”

With Jermain Defoe injured and Alfredo Morelos suspended, Kamberi is set to lead the line in Portugal on Wednesday when Rangers take a 3-2 Europa League lead to Braga.

The on-loan Hibernian forward said: “I try every day to give the manager something to think about to play me. I will respect any decision he makes. It’s about Rangers, it’s not about me. It’s about what is best for the team, and I will be ready whenever he gives me a chance.

“I have that responsibility also for two years at Hibs. But I know it’s something different at Rangers in the Europa League away in Portugal. It’s not going to be easy, everybody knows this, but we have the quality to win. “