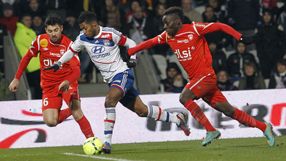 Lyon, bidding for an eighth Ligue 1 title, rejected a loan bid For Argentine striker Lisandro Lopez from Serie A champions Juventus and denied rumours Brazil winger Michel Bastos was on his way out.

Lisandro also asked to be relieved of his captaining duties, one day before club president Jean-Michel Aulas revealed the club had snubbed the Juventus bid for the Argentine hitman who joined the club in 2009.

"I'm used to seeing my name [in the media] during the transfer window. It would distract me but now I just don't pay attention anymore," Bastos told reporters.

Manager Remi Garde said transfer speculation around his team was nothing new.

"It could be a distraction but the players are used to it, but personally, I cannot wait for January 31," Garde told reporters on Wednesday.

Leaders Lyon have virtually a full squad at their disposal, with Jimmy Briand the only absentee through injury, while Evian's squad has been decimated due to the Africa Cup of Nations with five players, including Tunisian Saber Khlifa and Congo's Cedric Mongongu, away on international duty.

PSG, who have let Brazilian winger Nene join Qatar club Al-Gharafa, will be without Thiago Silva after the Brazil centre back was ruled out for three weeks with a muscle problem.

The capital side will also to have to make do with Thiago Motta after the Italy midfielder was handed a one-match ban for picking up a red card in PSG's previous league game.

They will be looking to top-scorer Zlatan Ibrahimovic and new signing Lucas, who showed great qualities despite failing to score on his debut in a 0-0 draw with AC Ajaccio last weekend.

"It's the game of the year," Bordeaux striker Nicolas Maurice-Belay told the club's website.

"We will move closer to the podium if we win this match."

Bordeaux have 32 points and trail third-placed Olympique Marseille by six.

Nice, fifth but level on points with Bordeaux, will look to continue their good run having lost only one of their last nine league games when they travel to Lille on Saturday.