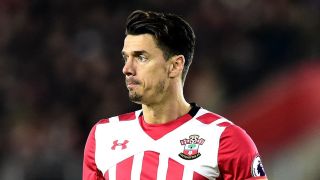 The defender is reportedly closing in on a move to West Ham after handing in a transfer request, with the Portugal international not selected by Fonte since January 2.

Southampton host Leicester City on Sunday, having lost four Premier League matches in succession, but it was Fonte's future that dominated the agenda at Puel's pre-match press conference.

"This situation with Jose is difficult for the squad," Puel told reporters on Thursday. "It's difficult for him also. It's not just about this market; it's been since the beginning of the season.

"It's been a difficult situation for Jose because he's always in discussions with the club, about contracts, or no contracts.

"I took a decision at the beginning of this [transfer] window to keep Jose out of the team, to study different possibilities and to protect the team from all this speculation about Jose.

"With this many games it's important to keep focused about our game, not just on the situation of Jose. It's difficult, but the squad can take responsibility."

Southampton have been linked with a move for Liverpool's out-of-favour defender Mamadou Sakho to replace Fonte, but Puel denied a deal for the former Paris Saint-Germain player is planned and insisted he would rather look to options within his squad.

"I know this player but I know nothing about this, it's speculation," Puel said. "We have a reflection about this possibility to see [if we will sign] another centre-back if Jose Fonte left. For the moment it's not the situation, and perhaps we will stay with the same squad, with good opportunities for Jack Stephens or [Florin] Gardos.

"It's a long time with a lot of injuries for Gardos, but he came back for the Under-23s before this game [the 1-0 win against Norwich in the FA Cup] with a good level and we will see if we just have Jack and Florin, or you might see another player if Jose Fonte leaves Southampton.

"Jose has different possibilities. He has the solution and the opportunity to see this, and we will see what the situation is in a few days. He was in training on Thursday morning with the players and he works normally with good spirit, and like a professional. We will see after the situation of Jose.

"We tried Jack against Norwich. It's important to see possibilities for different players and opportunities for the players. Perhaps we will stay with the same squad. We will see this when we reflect."