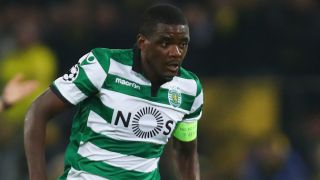 Sporting CP's communications director Nuno Saraiva has hit back at claims from West Ham joint-chairman David Sullivan that the Portuguese club rejected a bid for William Carvalho before performing a U-turn on transfer deadline day.

The Portugal midfielder was heavily linked with West Ham during the transfer window, and Sporting reportedly rejected a bid worth an initial €30million with a further €10million of performance-related variables.

Sullivan said on Friday that West Ham had a club-record bid for Carvalho rejected, only for them to accept it on deadline day, but with too little time left for West Ham to complete the deal.

But that suggestion has been emphatically rejected by Saraiva, who wrote in a statement on his Facebook page: "David Sullivan lies. To Sporting Clube de Portugal, as was said by its President, no proposal arrived for the player William Carvalho.

"The football industry is not the set of an adult film in which all obscenities are allowed. So the owner of a club demands a lot more than this intellectual pornography.

"David Sullivan has a duty to prove what he says. That is why Sporting Clube de Portugal challenges him to publicly show the proposals he claims to have been made as well as the evidence that Sporting CP received them.

"We have nothing to do with the actions of businessmen or relatives who live on the expense of players and who are offering them from club to club at a price, without a mandate, as if they are cheap merchandise in a supermarket, thus devaluing the player and the club, and creating lamentable situations that have already forced, in this case, Sporting Clube de Portugal to take drastic measures to defend against these characters that are parasites in the lives of some players."