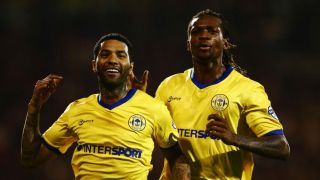 Both sides are marooned inside the bottom three as the season enters its closing weeks, with defeat for Wigan combined with a win for Rotherham United over Fulham seeing Gary Caldwell's side relegated.

However, they could get a reprieve whatever the result after Rotherham were charged by the Football League for fielding an ineligible player earlier this season - which could see them docked points, thus handing Wigan a lifeline.

Leaders Bournemouth could move a step closer to promotion to the Premier League with victory over Reading. Three points combined with other results going their way would secure at least play-off berth for Eddie Howe's side.

Brentford, who travel to Sheffield Wednesday, and Wolves - who meet Middlesbrough - are both hoping to crash the top-six party, with Derby County and Ipswich Town looking nervously over their shoulders.

In League One, leaders Bristol City will secure their return to the Championship if they avoid defeat against Bradford City and third-placed MK Dons fail to beat Fleetwood Town.

Preston North End will look to close the gap on City when they host Gillingham, while the battle to stay up sees eight clubs separated by just six points.

With Yeovil Town already relegated, there are three places left to fill in the drop zone, with Colchester United, Notts County and Crewe Alexandra all facing tough clashes with sides still chasing promotion.

Micky Mellon's Shrewsbury Town can set a new club record for clean sheets when they face Bury, the League Two title chasers having equalled the previous best of 21 in a season in their 4-0 win over Exeter City on Saturday.

With just a point separating the top two, a Shrewsbury victory would take Mellon's side top for 24 hours at least before leaders Burton Albion host Carlisle United on Wednesday.

Newport County, Exeter City and Luton Town are all looking to bounce back from weekend defeats to stay in contention for the play-offs.

At the bottom, Cheltenham Town need to start picking up points if they are to avoid the drop. They face Cambridge United, who would preserve their Football League status with a win.

Meanwhile, a crucial clash in the fight for survival takes place at Field Mill as Mansfield Town entertain second-bottom Tranmere Rovers, the latter six points behind their hosts prior to kick-off.