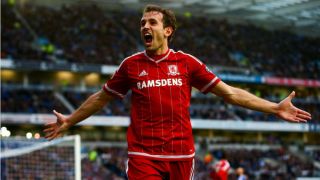 Middlesbrough emphatically ended Brighton and Hove Albion's unbeaten start to the season with a 3-0 win at the Amex Stadium to secure top spot at Christmas in the Championship.

Kike headed home at the near post from Albert Adomah's fourth-minute cross and the winger turned from provider to goalscorer on the stroke of half-time.

Cristhian Stuani sealed the points from close range after the hour and Derby County's subsequent 1-0 win at Ipswich Town dropped Brighton down to third place.

Hull City would have also moved above Brighton on goal difference with victory, but a Lee Frecklington penalty and an emphatic second from Joe Newell gave struggling Rotherham United a 2-0 win at the New York Stadium.

Burnley ended six matches without a win to get their promotion push back on track by beating second-bottom Charlton Athletic 4-0, while Brentford were similarly resounding winners, 4-2 over Huddersfield Town, as Alan Judge completed his brace from the penalty spot.

Aaron Wilbraham struck 10 minutes from time to secure a 1-1 draw for Bristol City and leave Jimmy Floyd Hasselbaink still looking for his first win as QPR manager, while a goal five minutes from time by Ross McCormack levelled matters at 2-2 for Fulham at Bolton Wanderers.

Bolton remain bottom and MK Dons are just a point and a place outside the bottom three after losing 2-1 at Nottingham Forest.

League One leaders Burton Albion battled back from behind on three occasions to salvage a 3-3 draw against Doncaster Rovers.

Coventry City could not capitalise and close the gap as Oldham Athletic grabbed at 1-1 draw at the Ricoh Arena.

Plymouth Argyle are the new leaders in League Two thanks to a 2-1 win at Hartlepool United.

The other incumbents in the automatic promotion places – Northampton Town and Oxford United – were beaten by the same scoreline by fourth-placed Portsmouth and Wycombe Wanderers respectively.

There was finally good news for York City at the other end of the table as Jackie McNamara earned his first win at the helm, the 2-1 triumph over Morecambe snapping the club's nine-game losing run in all competitions.