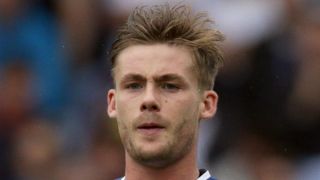 Wigan Athletic gained ground on League One leaders Burton Albion with a 1-0 victory over 10-man Rochdale at the DW Stadium.

Substitute Conor McAleny was Wigan's hero after Ian Henderson was sent off for Rochdale, with Gary Caldwell's team moving to within a point of Burton after Nigel Clough's team slipped up at Millwall later on Monday.

Aiden O'Brien and Lee Gregory scored early in the first half as Millwall claimed a 2-0 win at the New Den.

Scunthorpe United thrashed Swindon Town 6-0 at Glanford Park to boost their chances of sneaking a play-off place. Tom Hopper scored a second-half double, while Hakeem Adelakun scored one and assisted two in a thumping victory.

In League Two, Plymouth Argyle closed in on second-placed Oxford United despite a late scare against York City at Home Park.

Plymouth led 3-0 before York pulled it back to 3-2, but the hosts held on to move within two points of Oxford, who were held to a 0-0 draw at Cambridge United.

AFC Wimbledon match at home to Portsmouth was called off due to a waterlogged pitch, while Stevenage's meeting with Yeovil Town was postponed due to international call-ups.